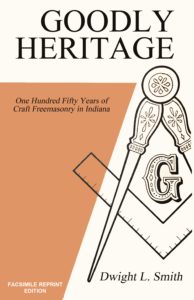 The Masonic Library and Museum of Indiana will be open and staffed during the Annual Communication of the Grand Lodge of Indiana F&AM on Tuesday and Wednesday, May 15th and 16th, 2018. Please take the opportunity to visit and see our latest exhibits. 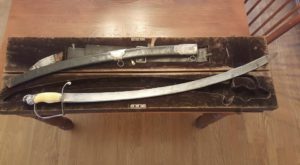 On display for a limited time: the Tippecanoe battle sword of Kentucky Grand Master Joseph Hamilton Daveiss (on loan from the Grand lodge of Kentucky AF&AM), and the silver officers’ jewels of Versailles Lodge No. 7 briefly stolen during the Civil War by Morgan’s Raiders, and returned by order of General John H. Morgan himself. 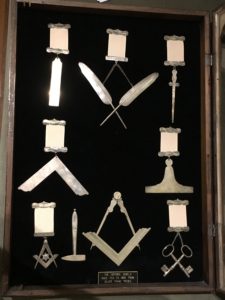 END_OF_DOCUMENT_TOKEN_TO_BE_REPLACED

The Library and Museum will be open on Saturdays from now through March 24, 2018, without need for an appointment.

(One exception:  The L&M will NOT be open on Saturday, February 10.)

Please plan to visit us to see our various special exhibits during this 200th Anniversary year of the Grand Lodge of Indiana, F&AM.  These exhibits include the George Washington Masonic Bible, on loan to the L&M from Fredericksburg (Virginia) Lodge #4, AF&AM, which will be in the museum only through February 22.

The Indiana Masonic Library and Museum website is back on the air, but currently under reconstruction.  Please pardon our dust as we start to provide a quality website for the edification of Freemasons (both in Indiana and in the world at large) and of the general public.