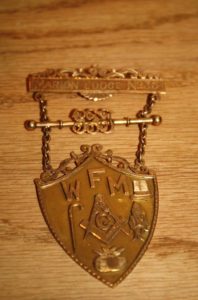 The Museum staff was confused for some time about this unusual item, as it didn’t match up to any known Masonic jewel any of us were aware of, and it had no documentation at the time we got it. This very impressive 14ct. gold jewel clearly depicts a bag, three fish, a cane, and a top hat, and it was issued by Marion Lodge 35, which used to meet in this building.*

And then we discovered this little article that finally told the rest of the story.

You can see the jewel is marked W.F.M. and the jewel was awarded specifically to honor this man in the picture. At first, we assumed they were initials of whomever had owned it. But his name was actually George Fenton Traub. It turns out the initials stand for Wayfaring Man. Our Masonic ritual for the Master Mason degree features a drama that is acted out for the candidate, and the role of the Wayfaring Man is one of the shortest ones. But depending upon the enthusiasm of the lodge brother playing the part, it can sometimes be proof that there are no small parts, only small actors.

Consequently, Brother Traub did this part on a very regular basis, and you can see he has a full costume that he assembled himself. Despite his appearance in the photo, he was actually a successful local businessman in real life. But he became so beloved—or possibly notorious—for his characterization that the lodge honored him with this extremely expensive and impressive jewel.