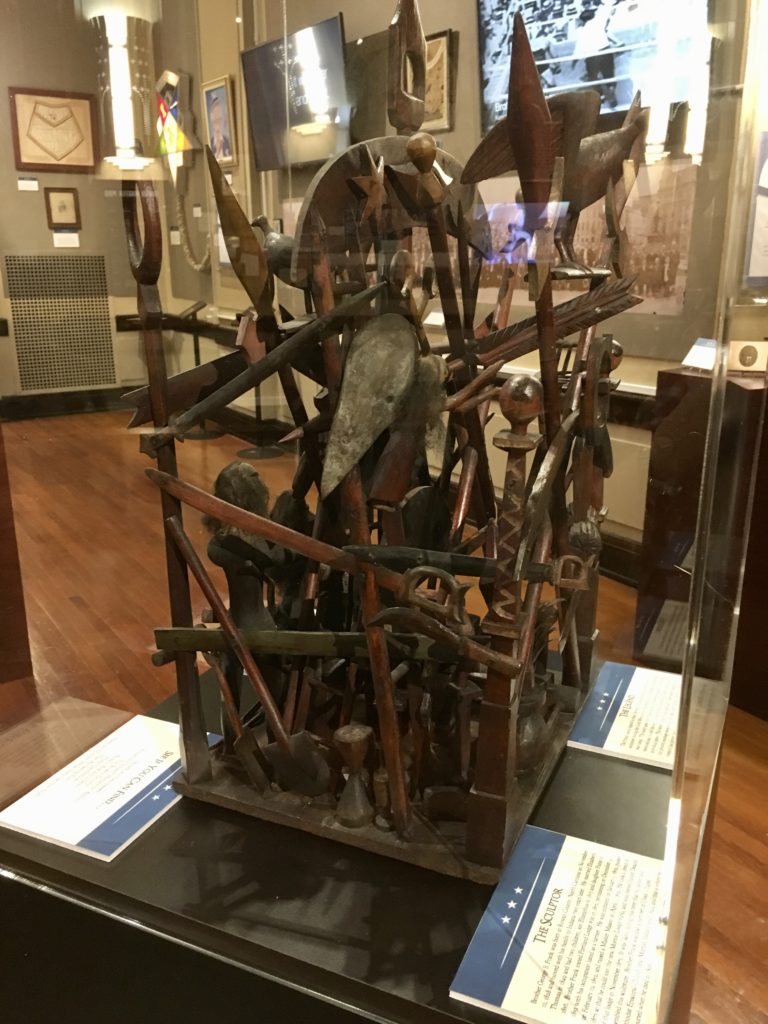 Sometime between 1860 and 1880, Indiana Freemason George S. Frank spent hundreds of hours hand-crafting about 70 distinct, recognizable Masonic symbols, assembling them into a detailed puzzle-like montage. This intricately hand-carved Civil War-era wooden sculpture is a one-of-a-kind piece of Masonic folk art the likes of which you will never find anywhere else: an expression in wood of all three Masonic degree tracing boards.  It must be seen in person to fully appreciate this sculpture, as it is nearly impossible to photograph.
The term “folk art” was used during the 1700s and 1800s to describe works of art made by craftsmen, manual laborers, peasants, tradesmen, and working-class people. Folk art is very different from the sort of formalized artwork that usually hangs in museums and galleries. It is created by everyday people, not trained artists, and is usually made from everyday objects and material as an expression of their emotions, their passions, or their ideas. And sometimes, Freemasonry and its symbolism has been the inspiration for incredible works of that expression by individual Masons in the unlikeliest of forms.
As you peer into the sculpture’s recesses, each new viewing reveals even more details, and nearly any Masonic symbol you can think of from the first three degrees appears somewhere deep within its many layers of carvings. Brother Frank even used locks of his own hair for the three human carvings. While the overwhelming majority of the sculpture’s carvings are recognizable as Masonic symbols, there are a few that are not, including the large bird with unfurled wings on the top, and several Medieval staffs or spears that help connect the structure together.

In 1830, two year-old George S. Frank’s family uprooted themselves along with several of their neighbors from North Carolina and headed West. The three month long trip took the Frank family from North Carolina across winding trails, paths and unimproved roads until they finally reached the Cumberland Road which led West to the small village of Indianapolis. There they were informed that Portland Mills was a thriving town “about fifty miles farther west with a good grist mill, a tannery, and stores where salt, calico and other necessary supplies” could be obtained.
They settled around Portland Mills in Parke County, Indiana along the Big Raccoon Creek, near what was then called Mansfield Lake (later Raccoon Lake). Portland Mills had been established in 1821 as a settlement along an old Indian trail, just nine years before George’s family arrived, and there was soon a grain mill, a saw mill and a distillery built on the creek. When the Franks arrived, the town was surrounded by a dense forest of white oaks and yellow poplar trees towering 100 feet. In addition, there were huge sycamores, sugar maples, black walnut, ash, red elm, sassafras, pawpaw and crab apples.
Constantly spanning the numerous creeks and streams that crisscrossed through the local countryside presented both opportunities and challenges to the local farmers and businesses. Bridges became vital to the area to serve the growing number of mills along the creeks, but stone structures were too expensive, and open wooden bridges deteriorated far too quickly. Covered wooden bridges, on the other hand, had a much longer service life. By the time young George had reached adulthood, the area was already known for its industriousness and creativity in the art of engineering, woodworking and carpentry. Between 1847 and 1920, Parke County, Indiana would erect almost 60 distinctive wooden covered bridges—more than any other county in America—and it eventually became a center for two of the country’s major covered bridge manufacturers. George Frank’s endlessly fascinating Masonic sculpture is perhaps an expression of that unique heritage of Parke County.
The Masonic lodge was established at Portland Mills in 1851, along with the first post office. Brother George S. Frank petitioned the newly chartered Portland Lodge No. 90 late in 1851 at the age of twenty-three, and became a Master Mason the next year, stating his occupation as a farmer. A little over twenty years later in 1873, he moved his membership to a newer lodge, Morton Lodge No. 469, where he went on to serve as a Junior Deacon. It’s possible that the tiny village of Morton was closer to his farm than Portland Mills had been, and he transferred there just after the newer lodge was chartered. In addition to his farm, he served for a few years in the early 1880s as the Postmaster of Brick Chapel, the next tiny community that lies south of Morton. George was also a member of Union Chapel Methodist Episcopal Church near Morton, Indiana. He joined the congregation in 1849, and was buried in the cemetery there in 1896.
The village of Portland Mills no longer exists today, as it was submerged in 1959 when the Mansfield Dam was built and Raccoon Lake became a reservoir. Portland Mills had the unique distinction of being in two counties and four different townships. It was within Clinton and Russell townships of Putnam County, and also Union and Green townships of Parke County. At one time, the community even straddled two separate Congressional Districts.

The Sculpture and the Civil War

But there is an especially tantalizing tale concerning the creation of this artistic demonstration of devotion to the symbolism and fraternity of Freemasonry. When the Civil War broke out in 1861, Portland Mills was eager to support the Union cause. It has been claimed that this community supplied more fighting men than any other of its size in Indiana, and the area’s covered bridges were used to help train local soldiers in fighting around structures.
The Frank family legend states that George S. Frank served in the Union Army, and that he actually carved the pieces of this sculpture during the Civil War while imprisoned in a Confederate prisoner-of-war camp. The legend says that Frank did so to preserve his sanity, and “swiped firewood and traded his own rations for bits of wood” in order to carve each individual piece. The legend concludes that Frank assembled these various pieces together into the present three-dimensional montage sometime in the 1880s, after the war. The underside of the sculpture’s platform is stenciled, “M. O’Connor & Co. Indianapolis, Indiana,” which was a general merchandise supplier in the 1870s. This was likely a scrap piece of wood Brother Frank later obtained that allowed him to mount his collection of disparate carvings.
Following his death, the sculpture remained in the possession of Brother Frank’s family. In the 1920s it was stored in their coal shed near Rockville, Indiana, until it was found and given to the Scottish Rite Valley of Terre Haute Museum in 1971, where it was on display for the last 45 years. The Masonic Library and Museum of Indiana acquired the sculpture on September 13, 2018.
Our research has shown that a ‘George S. Frank’ from Indiana and born in North Carolina did serve in the Civil War but was inducted at age 31 (not 21 as our Masonic artist would have been). This may have merely been an error on the paperwork.  However,  we cannot prove or disprove specifically that Brother George S. Frank of either Parke or Putnam County, Indiana was ever a prisoner of war.  If the legend can ever be verified, this sculpture has even greater significance as military prisoner-of-war art, or “trench art” from the Civil War era. In fact, the Indiana War Memorial was convinced enough by the story that the sculpture was exhibited there for several years on loan from the Scottish Rite.
We are continuing to research Brother Frank’s story and possible military record. Nevertheless, this beautiful sculpture has survived to show us an exquisite example of what Freemasonry means to many of its members, and the sort of dedication it inspired.